Their Hearts in Tipperary Wherever They Go- The POGUES in Atlanta 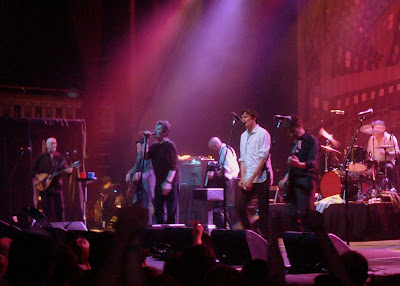 I never dreamed it would really happen. I've been told by countless boys over the many years who tried to convince me the they were bigger fans, far more knowledgeable than I, that it would never happen. I had missed my chance; I would never see The Pogues in all their glory- meaning with Shane MacGowan in the front.

Well boys, you were wrong. Never underestimate my unrelenting loyalty to the bands that are my soulmates. Not that my steadfastness brought about this strange, five-city US tour that paused in none other than my Atlanta, Georgia, but I'm still claiming it as my own. And my own doesn't begin to express what we were a part of at Monday night's show. I could almost cry.

Shane MacGowan is is unwell. In fact, he looks dead.

Hell, it's true. The poor man is in such bad shape and it is astonishing that he is still alive at the not-so-ripe old age of 52. I remember reading years ago about Sinead O'Connor turning him into the cops in an effort to curb his drug and alcohol use - please! - and the band has broken up with promises never to speak again countless times because of his self-destructive quest.

Apparently he has a handler, someone to watch over him and make sure he doesn't wander off and go missing- he is really and truly that broken a man. Says drummer Andrew Ranken, "He can perform when he's wasted if he wants to perform. " I've heard stories of him being rolled out in stage in a wheelchair, promptly vomiting and that was it. We made bets with the people next to us on how many songs he would make it through. The bets were just 3 and 5 songs- all made with smiles of understanding that we would happily accept whatever he could give.

They had what those in his inner circle refer to as "the cage" set up. It was a curtained in area on the side of the stage - which might be be compared to a makeshift kissing both at one of my parties - where Shane would retreat to every now and then when he needed a break.

But despite our indulgent pessimism- there he was on the stage for the entire show but for minor breaks. Shane MacGowan bold as day, bright as sun, hissing saliva as he sang having fallen from grace with God. And if you don't believe my account just listen to his scream at 55 seconds in:

THIS, was their second song. This land was always ours, was the proud land of our fathers; it belongs to us and them, not to any of the others. And their third was that sacred ballad The Broad Majestic Shannon. Shane sang of tears on our cheeks, the cross at Finnoe, and our hearts remaining in Tipperary. His plea to take his hand and dry our tears and forget our fears made me still, despite being surrounded by more than all the chaos you might expect in a sold out show of thousands of incredibly drunk men.

There was so much more that they did. The anthem that applies to Palestine and Iraq as much as it does Ireland, Thousands are Sailing was triumphant and heartbreaking: where we go we celebrate the land that makes us refugees. Lullaby of London, McGowan's equivalent to the Mahmoud Darwish's Under Siege was a blessing as it washed over us:

... May the ghosts that howled
Round the house at night
Never keep you from your sleep
May they all sleep tight
Down in hell tonight
Or where ever they may be...

...May the wind that blows from haunted graves
Never bring you misery
May the angels bright
Watch you tonight
And keep you while you sleep.

This is my dear friend Jay and I, Jameson whiskey in hand before the encore: 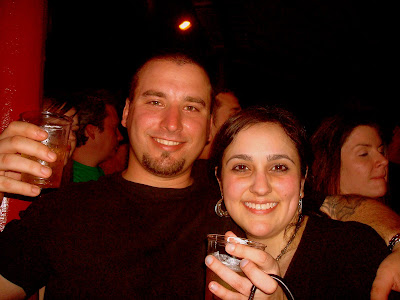 I felt stunned in this moment. Stunned that it really happened and I was there. How when I would tell this story I might nod my head in the way that my Uncle Michael in Ireland might while telling a story that was beyond belief. About how I never dreamed it but it really happened and I have proof. And how my heart remains with the lads that are THE POGUES.
Posted by Sara Ashes at 1:25 AM

You know, I think maybe I didn't fully believe that you saw them/Shane McGowan until I read this blog...I can't believe you've now experienced Thousands are Sailing (and the rest) live!! This is amazing and beautiful, and I'm thrilled that you got to be there!

As I read this blog I couldn't stop myself from playing The Pogues while reading; thinking of how much more fun it would have been listening to them live :) I'm happy that you at least got to!

I am so glad you got to see them!!

When they were in Chicago last summer, we waiting 2 fucking hours in the sweltering balcony of the Riv for McGowan to be ready to go on. It was worth it. I think he's living his dream, even if it's a broken one.

he is definitely living his dream! its so crazy whatever fate determines the longevity of our broken rock n roll icons. like why is Amy Winehouse still alive but Janis Joplin kicked it after gracing the world for just a minute? whatever the reason is, i can't believe he lived long enough for us to see him!

The Tribe of Five said...

It was the same when we saw them in Seattle last year--an incredible show with momentary absences where Shane would go have his head dunked in a bucket of icy water or whatever offstage when he started to get too tangential and ludicrous. Glad you had fun!

Beautiful and fitting tribute! What an incredible night!