I'm Super Human for You - the Flaming Lips visit Atlanta 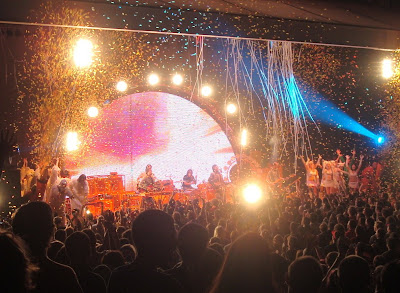 When you come to a party at my house, you can count on there being a big ass spread of delicious food, the cocktails will be flowing, good music will be playing and there probably will be (at least) some glitter-based decorations. Expect no less at my house. I was raised right by the Queen Hostess, the lovely Louise Totonchi.

Similarly to my party philosophy, the Flaming Lips know how to throw a rock n roll show. From the moment the first note was strummed at Chastain Park tonight, confetti, smoke and balloons filled the air. A quick glance around me revealed dozens of giggling, joyful people awaiting excitedly their chance to hit one of the fifty balloons up in the air. Oh and there was even a man in a Space Bubble:

Flaming Lips frontman Wayne Coyne projected love and joy from the stage, declaring that despite the heavy Georgia air in August, "I'd wear a polar bear jacket, I'm super human for you." And he wouldn't have stood out at all in such a fur- the stage was filled with costumed lovlies, boy and girl bunnies, King Kong (who wielded Wayne on his shoulders for a whole song), a giant butterfly, a giant catfish- all dancing nonstop. An ingenious feature was a video camera mounted on Wayne's microphone; watch this footage of Fight Test both on stage and with the mic cam view projected behind the band:

I should mention that the Lips know how to treat their party guests. From the moment tickets were bought, we received a link for a free download of three songs from their yet to be released album which included Covinced of the Hex, my highlight of tonight's show. A few days later a link was sent to three b-sides. And if that weren't enough, they also promise to send a link to a recording of the entire show we saw tonight. Nice hospitality!

It was a terrific show tonight. We were grateful that the sky waited until we were in our cars to open up and shower, but that the lightning didn't hold back its contribution to the spectacular light show.
Posted by Sara Ashes at 12:18 AM

So glad you got to go! And SO glad it was an outdoor show...nothing like seeing these Crazy People under the night sky, eh? =)

Hahaha! I just changes into my pajamas and a bunch of confetti fell out from under my shirt. I didn't even know I had "caught" it!

I'm so happy for you. The Lips are an amazing experience.

Dang. I didn't know they were in town. :-( Oh well, I saw them at Centennial park a couple years ago when they played a free show.

That sounds like a wonderful show. I love the Flaming Lips. They are playing in Boston on Sunday, but I can't go. Dang it. That man in a bubble is awesome.