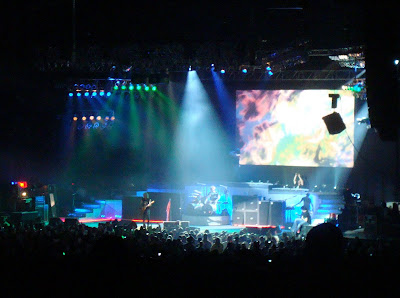 About a week ago I saw the great hair metal band Poison in Atlanta- this is the third summer in a row that I have seen my Poison boys at Lakewood Amphitheater. Don't hate just cuz you're jealous, haters.

So I'm sad to say we missed Sebastian Bach - formerly of Skid Row of course - as the first warm up act. We did get to hear both I Remember You and Youth Gone Wild while walking up through the parking lot though. Don't you worry.

I couldn't have been more excited that the second warm up band was Dokken. Dokken who has but two songs that you might have heard once before: Dream Warriors and In My Dreams. Nevertheless, Dokken had no qualms about bragging repeatedly about their 27 year history of "rockin Atlanta". Apparently they are also living clean now- another fact they repeated throughout their 40 minute performance.

Seeing Dokken on stage was so funny - pretty much the only people standing in the whole place were those directly in front of the stage (we were on the lawn). It reminded me of when I saw L.A. Guns open for AC/DC - with cousin Laith and Amu Nabeel with his walkman - in 1991. We had the best seats I think I've ever had for a stadium show- like 9th row. I was obsessed with L.A. Guns- likely the only fan there. I had made a banner that said "Tracii Aligns the Planets" - hot pink spray paint on a white sheet. Guitarist Tracii Guns kept looking at me with confusion. It was there that I learned the classic rock n roll lesson that perhaps it isn't the best idea to put an inside joke with your high school girlfriends on a banner for a show.

Back to 2008. So there was this woman standing in front of us wearing red shorts and a purple and blue tiedye Dead shirt that knew every word to every Dokken song ever- amazing really. She was there with her teenage kids and a dude who appeared to be both one of her teenage kids' friends but also the mom's boyfriend. Yikes. She was hilarious though and definitely contributed to this being one of the classiest nights ever.

The highlight of Dokken's performance was the audience being repeatedly taunted by the band, including but not limited to such gems as "We could do something soft and mellow or we could do something loud, rockin and in your face!!" In my face indeed.

And then there was Poison. Dear, sweet Poison who have rocked my world since age 14 and have even made appearances in my dreams. Y'all know my love for these boys is never ending. And you know this current display of affection can only mean one thing- that my boys sorta sucked this time around:

1. I called every song before they played it because it was the exact same set as the last two years.

2. Bret's voice was hoarse, scratchy, totally effed up. Probably from doing 3 reality shows plus world tours at the same time over the last year.

3. Speaking of reality shows, they were clearly filming one because Bret had so many required lines that he repeated over and over. For example, if Atlanta had a dollar for every time Bret referenced "rocking Atlanta Georgia for the last 22 years," the city wouldn't have had to do those mass layoffs a couple months ago. If we had two dollars for every time he mentioned the show Rock of Love- or better yet, the new Rock of Love Tour Bus - Atlanta could build the Beltline. You get the picture.

4. They had to take a lot of breaks- like moments where just one member of the band was on stage while the others were backstage recuperating I guess. Bret did Every Rose by himself, C.C. did instrumentals of Amazing Grace (ok, so that was kinda awesome) and Georgia on My Mind. Rikki did a Grateful Dead-like Drumz/Space thing.

5. They played for barely an hour. They could hardly keep it together long enough for that short period of time and practically ran off stage.

6. Once again, the super pro-America junk before Something to Believe In. Yes, Bret, we know your former bodyguard was a traumatized Vietnam Vet who "fought a losing war on a foreign shore" and killed himself. What better reason do you need to realize that this War is shit and we need to bring the troops home now?!?

But all that said, I still love my boys and will always associate them with all things good and hairspray and spandex and fallen angels. And though this show was lackluster, I am grateful to them for once again timing their Atlanta stop for exactly when I needed some cheering up.

There's a whole after-the-show story that will have to be reserved for another time because it involves Bret Michaels' cell phone number and is on the level of mythology. And no one likes debunking myths so I'm gonna keep my mouth shut on that piece for now.

So you're not too disappointed, here's my crappy, shaky faraway footage of Poison doing their encore Talk Dirty to Me. It gets less shaky after the first few seconds I promise.

You know how space/drums at GD shows gets named? Like Marshmallow Space or Crying Chocolate Tears for Brett Space? And who names them anyway? The band? Some elite cadre of dead heads? But I digress... Now, there is Poison Space!!!