First and Last and Always: the Sisters of Mercy in Atlanta 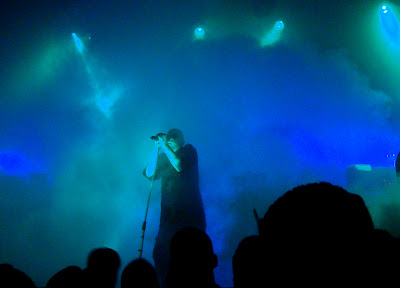 OMG y'all. I am typing this still mired in disbelief of what I saw tonight.

Tonight, at the Variety Playhouse in my hometown of now almost 9 years, I was just three people away from Andrew Eldritch, AKA the Sisters of Mercy. The last time I saw this man was in 1991, with Gang of Four, Public Enemy, and Warrior Soul at Poplar Creek in Chicago. This means that tonight, I was inches away y'all... normally not such a big deal because I usually don't engage in such star-fuckery... but this was the Sisters of Mercy.

This is a band that has been defined by it's elusiveness. And its not just cuz of their extremely impressive fog machine that put our Carnival of the Dead fog to shame. Can you imagine that it has been 17 years since I last was in their presence? When I last saw him Andrew Eldritch had long hair! (as opposed to tonight's shaved head.) I become a teenager instantly at the memories of less than an hour ago. They skillfully and instantly make me a drama queen.

I couldn't have been more delighted to have at my side my sister Kristi who was also indulging her goth inner-child. The show we saw tonight was grounded in their Floodland album, highlights including First and Last and Always, This Corrosion, Dominion/Mother Russia, and Lucretia, My Reflection. (My inner drama queen gasps as I type these sacred names)

Can I help it if the Sisters of Mercy, the quintessential goth band, makes me smile as much as the Grateful Dead does?

Absent the women's choir that is so present in the album version (and 1991 tour version) of their songs, tonight the audience sang along with the crucial parts. The harmonies and chants rang through. Y'all, I am way too cool to sing along with bands live, but for some godforsaken reason I relished the opportunity to do so with the Sisters. It felt perfect.

It was an amazing night- complete with Something Fast and even Vision Thing. Those of you out there that are similarly gushing know what I'm talking about. But perhaps even you haven't experienced it just three people away from the source. Be still my teenage heart!
Posted by Sara Ashes at 11:42 PM

YES!!!!! Fucking brilliant! Now write the essay on the correlations between Dead jams and Sisters of Mercy epic rock ballads. Or something.