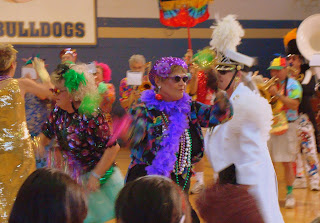 There is no doubt in my mind that Amy Sedaris is a genius. Who else would have the foresight to be led in to her Decatur book signing on Friday night by a dragged-out marching band in boas and sequins?

You’ll be glad to know that Amy and her long-time imaginary boyfriend Ricky are still together (he’s not dead anymore; she reported that he had been ‘murdered’ on Letterman a couple years ago). They had a baby but they lost it. “Not LOST IT, lost it- but lost it, lost it. As in, we can’t find it.”

Earlier this week Amy appeared on Martha Stewart’s talk show. I missed it but Reem told me all about it and then I watched the video. They were making cheese balls and Amy kept referring to A1 Sauce as bong water. Martha would reply, “bog water?” “Yes, Martha, BOG water” replied Amy with a big ol’ wink towards the camera.

One of the audience members in Decatur on Friday night asked Amy if she were ever on Martha’s show again if she thought she could make Martha cry to which Amy quickly replied “Oh honey, most men don’t cry.” Zing!

The most exciting part for me personally was that I got to ask a question directly to her in the Q & A section of the program. I asked her what her 3 favorite garage sale purchases have been. She stumbled and stuttered for a moment and then exclaimed “Bitch!” in my direction- mine was the only question she didn’t have a stock answer for! I am SO proud. Amy Sedaris called ME a bitch! She finally decided that her three favorites are:

Afterwards, she signed my copy of I Like You: Hospitality Under the Influence- she drew a magic wand coming from a ghost’s hand and wrote “Magic Happens”.

In other genius news, I got to see close up and live the lovely kids of Rilo Kiley on Saturday night at the Variety Playhouse. The ambiance on the stage felt like the 1940s- Malissa noted it was reminiscent of the bandstand era. The backdrop was a luminescent glimmering curtain that changed colors depending on the lights. The band wore black, white and silver- the boys with ties and suspenders, Jenny Lewis in a playboy bunny-like number with a silver bowtie.

Simply put, they were fantastic. Great performers, changing and rotating instruments the whole time. One of the many treats was their ‘cover’ of a song that Jenny wrote with the Watson Twins, “Rise Up with Fists!”- but they did it sorta reggae/ska-style. They didn’t play my favorite song this time around, but I suppose that is reason enough to see them again next time. 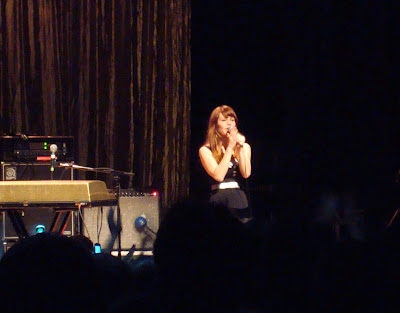 Thank god there is finally some rock n roll happening in this city! And there is SO much more to come in October.
Posted by Sara Ashes at 2:30 AM

I am insanely jealous of your attendance at both these events!! They are some of my favorites for life...I have loved Jenny Lewis since Troop Beverly Hills, and Amy Sedaris since before I even heard of her.

thanks! it was a truly dreamy weekend indeed.