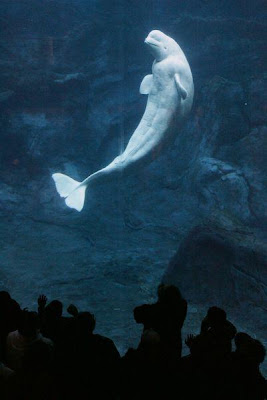 I just read that Marina, the 25 year old beluga whale who lived at the Atlanta Aquirium, passed away this morning. She had been there for just two years. She's the second Beluga, in addition to two while sharks, to die there this year. Marina stopped eating two weeks ago and the vets discovered she had ulcers. Ulcers. She was worrying.

The other deaths also seem odd:

Gasper, another beluga, was euthanized after veterinarians determined he would not recover from a bone disease he contracted at another facility. Whale shark Ralph died from peritonitis, an inflammation of the stomach lining. Whale shark Norton was euthanized following months of declining health. Aquarium officials say they don't know what caused his ailments, but suspect a pesticide used to treat the tank for parasites may have contributed to his demise.

It just doesn't seem right to keep these giant beautiful animals like this. I wish they were out there swimming in the blue.
Posted by Sara Ashes at 2:55 PM

it troubles me so freaking much how they just ship these amazing animals across the world and when they die due to fucking pesticides in their tank water those fuckers are surprised. we're messing with the order of things! (no shit, v.)