When your friends lock you out of the cabin

I got to spend a couple days last week in the Blue Ridge Mountains on a retreat with my coworkers. It was beautiful up there; we stayed in this lovely cabin with a hot tub, pool table and the most beautiful view of the mountains.

Since there were ten of us staying there, some of us brought air mattresses for ourselves. Mica and I decided that we should set ours up on the big old deck and sleep under the stars. 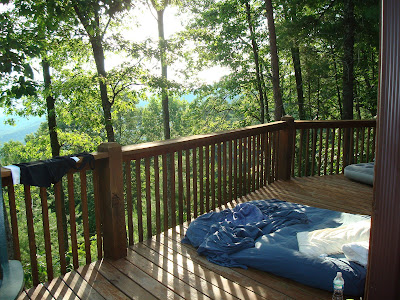 We stayed up pretty late that night, eating, drinking, bonding as is proper during "retreating" type scenarios, and at about 1 am I set up my bed space. Almost everyone else was still awake and hanging out. I fell asleep inhaling the clean crisp perfect-temperature mountain air.

I woke up around 5am. The sky was this amazing charcoally misty grey. It was stunning and I felt so lucky to have this opportunity to be out of the city and see dawn in a way I never do. I also felt like I had to pee, per usual considering I've had a lifetime case of nocturia.

I head towards the kitchen door to go inside to the bathroom. Oddly, it was locked and clearly not opening. Huh. That's weird, I think to myself. I walk around to the other door that leads to the master bedroom and find it locked too. Mica stirred at this point from her air mattress and I whisper to her "did they lock us out?"

Well now this is getting kind of hilarious but I'm also feeling some uh, increased bladder pressure. I'm notorious for my teeny tiny bladder. Its also 5 am and I'm kinda asleep and maybe not thinking as swiftly as possible.

I assess the situation I'm in: the only way you can access the deck are through these two doors- its high off the ground. There's no getting on or off of it. I have no problem peeing in the woods but the "woods" are about 20 feet beneath me and I am SO not about to attempt to pee off the side of the deck. I contemplate for a split second the hot tub on the far end of the deck but decide that I'm nowhere near that desperate yet.

I walk back to the other side and try the kitchen door again. Its still locked. I really just couldn't believe that my urban-ass coworkers locked us out. I mean, and locked themselves in, in the middle of the country-ass country. There was a lot of disbelief and concern when Mica and I announced that we were setting up camp outside - discussion of bear attacks and the like - and how do they support our decision? By locking us out with the bears. Unbelievable yet also hilarious that you can take the city kids out the city but you can't take our we're-so-used-to-getting-robbed-in-Atlanta out of our lock turning, alarm-code punching fingers.

At this point I realize that Kori is asleep on the futon right next to the window on which I decide to tap with increasing urgency until he wakes up. I gesture madly at him to let me in- I really gotta go. And when you gotta go, you gotta go.

God bless you Kori. My bladder and I thank you for and apologize for interrupting the sleep you so very much need to gear up for starting the revolution.

After all this I still have a pretty lovely night- I wake up at various points and see the sun rising over the gorgeous mountain. The charcoal turned to purple turned to pink framed by trees that waved in the wind.

When confronted, none of my coworkers cop to being the perpetrator of our external imprisonment. None! Mmm hmm. Either they were too drunk to remember- or they are liars. I am delighted by either of the possibilities.

I realized later that I got a million chigger bites. So did Mica. But despite the bites and near bladder explosion, I am so grateful I was able to spend a night on that deck with that beautiful view and a couple days with some of the most wonderful people on earth. Despite their door-locking propensities. 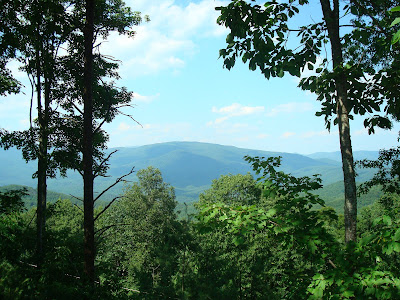 God bless you, Sara T, for writing this hilarious post. Sleep can wait, for the revolution will need relieved bladders as well.

PS
This is a link to my personal blog, The Cheddar Box. Yes, I have two blogs. Quite nerdy, I know.

I am just as, if not moresor nerdy than you my dear! I claim two blogs and contribute to another. And there might be more but mylips are sealed. :) Its good shit and I'm so glad to know I have a fellow blog obsessor at good ol' number 83!

Oh this is rich. "Country-ass country?" Brilliant word play in a horrifying and beautiful blog.

Man, it's like everyone I know was in the mtns at some point last week. I was in Highlands, where were you?