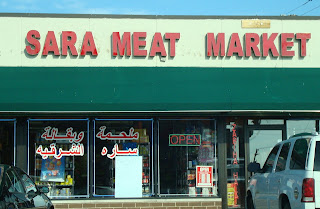 Check out the name of the new butcher in Chicago. Beautiful!

Speaking of meat markets, how bout the Kroger in the Edgewood shopping plaza on Moreland? I had no idea that this was the new spot to cruise.

When two different guys checked me out in the time from the car to the store I thought it was a bit peculiar. When it continued inside, dude after dude walking by, looking me up and down and smiling a little too friendly, and culminating in a guy asking me out after a brief conversation in front of the dried fruit I knew I wasn’t just grocery shopping- that there was all sorts of other kinds of shopping going on- know what am sayin ladies?!? Not that I blame the guys- I was looking unusually irresistible in my hair-is-too-dirty-to-go-out-but-I-don’t feel-like-showering hat and last night’s makeup. I think the Kroger is the new heterosexual equivalent of the Midtown Home Depot for gay men.

This has been a lovely first day back in town after being gone for the last couple weeks. I slept in till noon after having a wonderful dream where I was dating David Sedaris (then while dreaming remembered he was gay, but it was all good cuz I still got to hang out with Amy and saw her craft-filled apartment). I made a Moroccan lamb and apricot tagine and tomato, lentil and orange soup. I took a bath with lavender salts and burned rose candles. And now the Simpsons are on and the Secret Agent is on his way over for what I hope will be a delicious meal. It’s good to be home in Atlanta.
Posted by Sara Ashes at 8:44 PM