Why Our Dad is the Greatest

Priceless moments from this year's Thanksgiving, featuring our father. 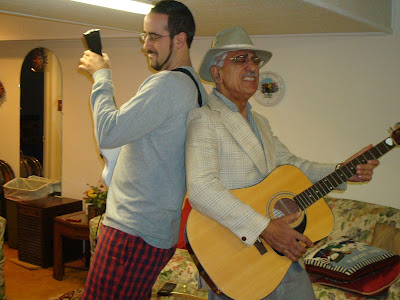 1) Pretending to play guitar while we played Guitar Hero III. Not just air guitar, he insisted on having a prop. P.S. Emil never changed out of his pajamas that day. 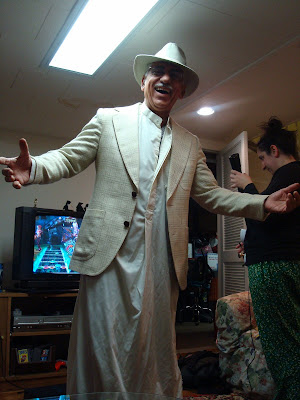 2) Playing dress-up in a jacket that he bought in London more than 30 years ago (he's so skinny!), a Panama Jack hat given to him by a patient and a dishdasha of course. All items "found" in the storage room which he would emerge from after donning each new piece proudly and demand "What do you think? Don't I look great?"

3) Singing "That's Amore" on the karaoke video game (as a shirtless/shoeless black man no less) and dancing all the while. This was repeated the following day as duets with my mother to "I Left My Heart in San Francisco", "I've had the Time of My Life", and an encore performance his Dean Martin greatest hit.

Lots of love to Dad!

our dad rules. rules you all.

i can't watch the video at work... afraid my laughter will ring through the halls - but I will watch it later!

This makes me smile every time. So much better than playing Scattergories- even though Dad came up with the fabulous answer for the letter "I" in the Body of Water category: Ice Cube.

i love sweet iraqi fathers who do dorky things! these pictures are adorable!