Love the Size of Tiger Sharks

I have wanted desperately to see the new Sand Tiger Sharks at the Georgia Aquarium since they arrived just before Thanksgiving. The video with their jagged teeth that go in every direction mesmerized me - so beautiful and terrifying! And after two unsuccessful attempts of trying to see them, I finally got my first glimpse last week.

We started out in the tunnel, and I proceeded to start my rotating search up and down waiting and hoping for the sharks to appear. 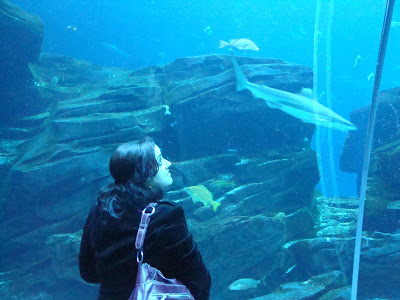 It's an awesome glass hallway where fish of all sizes swim around you - and lots of different sharks: hammerheads, wobbegongs, whale sharks, blacktip reef sharks, bonnetheads. I could stand there for hours- and have collectively waiting for a single appearance of the shy, still-adjusting-to-their-new-home Sand Tigers. 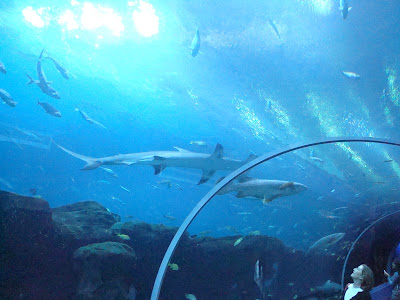 After standing in the tunnel for a good while, we decided to go to the big window because Mohammad hadn't seen the Manta Ray yet. I could sit in front of this giant window forever- it is so peaceful and beautiful to watch the fish go by.

I was settled in, sitting on the floor with my jacket off and purse splayed about when I saw it: a giant, bulky, jagged tooth SHARK start to swim by. I leaped up from the floor and sprinted to the edge of the window. Luckily Mohammad had the camera ready to document my expression of amazement and fear as I first laid eyes on this amazing creature. 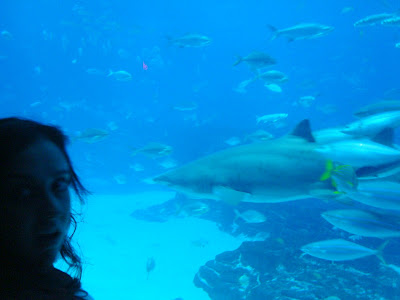 This is one of the most amazing sharks I've ever seen. It makes me think of the first times I saw the nurse sharks at the Chicago Aquarium as a little girl. Both made me literally freeze with awe. 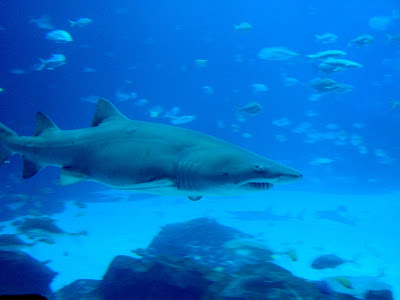 Afterwards we went and spent a good while at the shark-petting tank which was empty because it was a week day. I must have pet those sharks at least 25 times while we stood there. I think I'm making some serious progress on this life-long shark phobia of mine.
Posted by Sara Ashes at 9:00 AM

Nice work, sissy! Amazing pictures...I just have to say - BONNETHEADS? I bet those sharks totally get made fun of. "Hey, ya bonnethead!"

the current layout makes it look like the shark is gonna eat the rainbow :(

I LOVE the atlanta aquarium. manta rays are my favorite. good for you for petting the sharkies.