My friend and neighbor Doug sent on these amazing pictures he took of a redtail hawk on the roof of my car. I see hawks in the trees around my house all the time but had no idea that they would come so close. 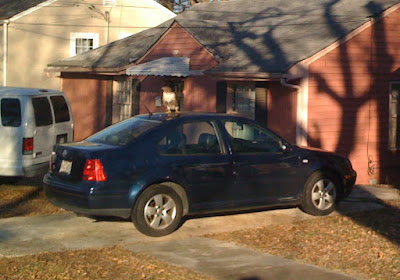 I love this shot that Doug got of the visitor taking off. I'm so grateful he stopped, documented this beauty and shared it with me. 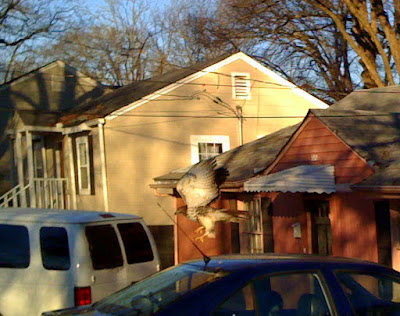 It reminds me of a similar breathtaking burst into flight I witnessed on my one-year anniversary in my home that I wrote about then.

A hawk landed on the fence in my back yard. I was crouched over in the craft room spraying acrylic on felt bluebirds and I saw her land out of the corner of my eye. I didn't have my glasses on because I had just gotten out of the shower but I ran quickly quietly to grab them and peered out the back door. There she was, perched calmly on the fence, surveying the area. I could make out each dark stripe on her white breast; the yellow of her talons was far brighter than I would have guessed. I started to cry a little, moved that she would stop here for a minute, thinking how many years it had been since a large bird had been so near me. This first year on my house has been more about cardinals: their cheeky calls, their mating, their bold confidence building a nest outside my bedroom window, despite the cat nearby. The bird today was strong, solitary, majestic. She hung out for moment, taking everything in, then ducked down, stretched her wings, and took off in flight. Her tail was bright red; when I went to check out the spot where she had just been, I found a single black and white feather.
Posted by Sara Ashes at 9:55 PM

Beautiful! I cannot believe that bird. Do you still have the feather?

I do! I have it stuck in an orange beaded tree-shaped candleholder that i love. its sorta like a halloween tree and the feather is at the center. I love it.

awesome! all my friends are blogging about hawks these days: http://nycmick.blogspot.com/2009/02/guess-whos-standing-in-window.html