A Great One from the US Supremes

On December 4, 2007, I had the great privilege of traveling to Washington DC to witness my wonderful colleague and mentor, Steve Bright, brilliantly argue a death penalty case to the US Supreme Court.

Steve was representing Allen Snyder, an African American man who was sentenced to death by an all-white jury in Jefferson Parish, Louisiana in August 1996.

I marveled and choked back tears as Steve made friends of usual enemies, Justices Scalia and Alito. It was by far one of the most amazing experiences of my life.

I’m happy to share that this morning the US Supreme Court came back with a 7-2 decision in Mr. Snyder’s favor!

Getting the Supreme Court to reverse a death sentence is reason enough to jump up and down in the halls, but not only did Steve get Kennedy, but he got both Alito and Roberts as well. What’s more, Alito’s decision is written in such a way that it will be widely applicable to future cases. Alito’s decision followed Steve’s oral argument step by step and found that the prosecutor’s justification for striking Mr. Brooks from the jury were ‘highly speculative’ and ‘suspicious’.”

The New York Times quotes Steve commenting on the ruling that

“the court has resoundingly told judges and prosecutors throughout the country that the practice of striking people from jury service based on their race must cease.”

Nina Totenberg with NPR’s All Things Considered did a pretty great piece that can be listened to here.

I am so grateful to my coworkers for their dedication to fighting the death penalty, and for making this wonderful victory possible. I am so proud, so honored to be part of this great work. 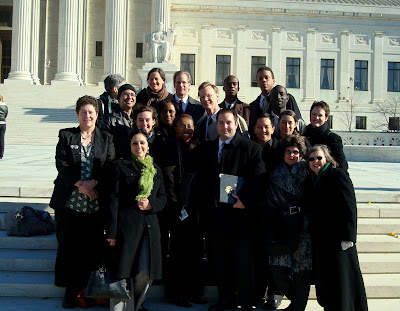 Honey, I LOVE that this happened for the country today.

And on a personal note, I'm glad you got this news today because, well, it just could not have come at a better time.

Keep on keepin' on warrior woman. all my love, Beck

Alito AND Roberts voting to reverse a death penalty case? I'm going to weather.com to check the temperature in Hell. I'm sure there's frost.