I slept well last night and had two really good dreams that I remember. The first was that we were having a party in Ireland- all my family was there. We were laughing, the weather was beautiful, we were on Burke Street. Out of the blue Mohammad showed up and surprised me- I couldn't believe he was there. He stayed for the night and my brother had an extra toothbrush that he gave him.

I'm sure this dream happened because Mohammad did surprise me yesterday by showing up unexpected to out impromptu celebration that we were not heading to the prison in Jackson, GA. I saw the car pull in and saw dark hair and sunglasses and said to Mica "A really hot guy just got here." Then I realized it was him and quickly applied blueberry-flavored lipgloss on my smile.

In the second dream, my sister, brother and I were hanging out with my Irish Grandmother, who we lovingly called Nanny. We were in Nanny's bedroom but it was different than it was in real life. There was a warm light, like almost like looking through a red filter on a camera. There was an old wooden stereo in this room that could play three records at a time. She had a table lavishly covered in cakes and cookies and velvet bows. Nanny told us that this was where the Snake lived, but that we shouldn't be frightened. I felt repulsed at first when I saw it slithering but then she squeezed my hand. I leaned my head on the scratchy fabric of her dress- at that point I was my little girl height.

I don't remember much else about the dream, just that it was so lovely to get to spend time with Nanny again. And also we drove around in a car that was made out of a grand piano. 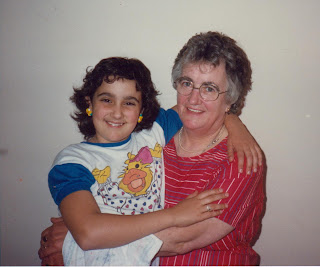