This evening my girlfriend and I went to a political soiree, a "fundraiser" if you will. I suppose this inherently means money, but as a low-budget lobbyist this is a part of the work that will always be a bit funny to me. Funny like allergic. But it's the mild sort of allergy that can be controlled with a well-planned pre-treatment of Benedryl.

So I learned tonight that it is SO much harder to behave properly when in the breast of the bourgeoisie than anywhere else.

Previously I would have told you that the hardest place to behave is in church, preferably on Christmas Eve when you're high on too much wassail and the anticipation of presents and sitting between your beautiful and hilarious sister and brother who like to pinch and elbow jab. At least when you're in church you have your Mom just down the pew to hold you accountable and pull you back into proper behavior after the lady directly behind you sings "Angels We Have Heard on High" at an octave seven times higher than everyone else- with excessive vibrato of course.

At the rich people's house tonight there was no such accountability. In fact, I found myself unable to even look at my girlfriend or risk dissolving into totally inappropriate giggles. Allow me to elaborate:

The Children of the Corn oil paintings. There were three different oil portraits, apparently of our hostess and her younger brother immortalized as the beautiful blond pale spooky children they most definitely were at some point. The screamed Flowers in the Attic. And they were the focal point of the otherwise painfully overdone Japanese-silk encrusted sitting room. I just couldn't stop staring even though they freaked me the hell out.

The Dogs. This house came equipped with two matching little dogs- I think they might be called Maltese. Their hair was done in bows and I will admit that they were pretty damn adorable. Our host identified them as "Trouble and More Trouble" which reminded me of dogs I was introduced to once named "Theo-dorable and Theo-terrible." Hilarious.

So the two Maltese spent their evening either jumping around demanding cold salmon from the buffet or taking it easy and lounging luxuriously on one of the $10K settees. My friend kept daring me to take pictures of the dogs while the guest of honor - a political candidate - spoke which made me want to laugh even more. I only managed to get one that wasn't terrible because it's really hard to shoot in mansion-ambiance unobtrusively with no flash. I should get at least a dollar for getting this picture: 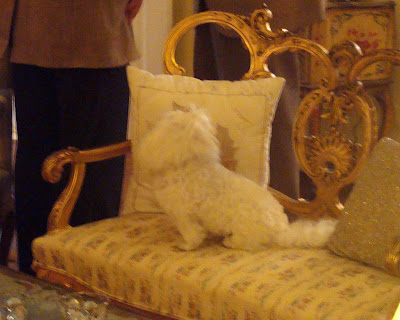 The Pigeons. All the while the candidate spoke, there was a strange cooing sound coming from another room. I swear to God that at first I thought there was a third Maltese being tortured in some remote corner of the mansion but then I realized it was more of a bird-like sound. I suppose that because they were rich it was probably more likely an exotic and endangered Peacock Pheasant than a common pigeon, but it sounded like a pigeon to me. Or maybe it actually was torture that I was hearing.

The lack of women. At this party of about 20-30 people, my girlfriend and I just may have been the only women actually there as guests. At first I thought there were other women there, but then my friend pointed out that these women were in fact, the help.

The Hostess. The Lady of the House. It was her home, clearly not her new husband's. While she obviously worked tirelessly to be the hostess with the mostest, laying out lavish platters of pork, salmon, tomatoes in a balsamic reduction, her hospitality was trumped by the permanent glare that graced her otherwise very pretty face.

The Gay Filmmaker Son. He had adorable growing out dyed black hair and had just graduated from art/film school. In true Royal Tenenbaum fashion, he talked of his love for dark violent films and disdain for his family. When I commented about a nice picture I had seen in the library (yes, a library) of him and his mother, he sneered "the only reason it's there is because she looks immaculate." I genuinely liked him- I look forward to seeing his Children of the Corn/Flowers in the Attic/Maltese-inspired movies some day.

The Kid's Table. No matter what my girlfriend and I could say or do, from the moment we arrived we were officially "young ladies" and were promptly hustled into the kitchen by one of the hosts for the "young men" waiting. We should have gotten an entertainment fee. Or jelly beans.

It was all just fabulous- you just can't make this shit up. Just try to behave like a grown-ass adult, or better, a "professional" in this scenario and see how well you do. I'll just keep trying to take covert pictures of tiny beasts and not spill the best mojito I've ever drank on the quarter-million dollar Spanish tile.
Posted by Sara Ashes at 10:26 PM

I just laughed so hard at the church description part. Angels we have heard on high??? That's our song!

This party sounds unbelievable. I would have to loved to have been there to elbow jab you and barf on the "setee" or whatever it is. Jesus...

Seriously?!?!!? This only shit only happens to you!!! The other day I was thinking (as I have been inspired by you and your sister) that maybe I should start a blog, but the more I read these 2 blogs I realize...I have nothing interesting to talk about.

I loved the son....he was my favorite. Was he also wearing a sweat headband and wishing he had a sister to love?

Once again..holy crap...the life you lead!!! I want to come and play with the werid rich people!!

that fucking picture! too too much. and that poor dog. you know he and the morose son plan the death of his mother. im thinking some sort of poison slipped into her 5 o'clock dirty martini. i am certain that you added more fabulousness to that house than it has ever seen. love it all!!!

I can't figure out who this is darn it!