This was a lovely weekend- complete with almost no plans- other than of course the Amy Sedaris book signing on Friday and the Rilo Kiley show on Saturday. I’ll post words and picture about both of those very soon.

Thursday night I finally got a picture of this parking lot painting that I’ve wanted forever. It’s at Piedmont and Pine, across the street from the Task Force for the Homeless. I assume it was the Task Force that painted it. It reminds me of that Oscar Wilde quote. 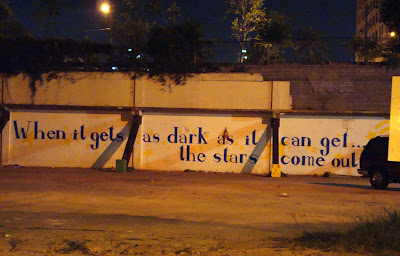 I spent the weekend days hanging at my house, crafting, cleaning, writng, playing with pictures. I cleaned out my closet, resulting in:

While I was sorting things into the archive box I kept thinking about how much I would have loved to have a box like this as a kid to play dress-up in. I do remember having a similar bag of my mother’s clothes that we wore for years for play, for Halloween, I think there may have even been a piece or two that made it into my goth-repertoire in high school. Like this black and gold scarf that was a part of every witch costume that came out of our home. God we loved that scarf.

Tonight I had Iftar dinner with Secret Agent Man and his cousin- both are fasting for Ramadan. Since the meal is to break the fast I wish they would just own up and call it “breakfast”.

And of course the cherry on top of the weekend was the finale of Rock of Love. The ending was the sort that I suppose would be satisfying to people who actually believe love can come from reality television. I was underwhelmed. Bored. My prediction is that on next week's reunion show Jes will anounce that she and Bret have "gone their separate ways but remain great friends." Bored!

However, this show did give us some great train-wrecks, trash, and reached new levels of slutacious-ness. I give Rock of Love two Reality TV awards for the show overall:

god. yes. i agree with all evaluations and predictions. what a letdown. bret michaels can eat it.