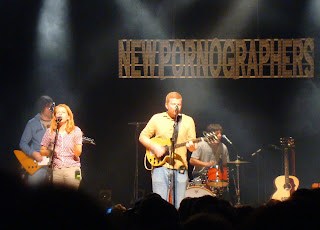 I just got back from the New Pornographers show at the Variety Playhouse. I’ve listened to NP for a few years, at times constantly while I work. I was excited to finally see them live; I’ve missed them their last few times through Atlanta. What I found out though was that I prefer their recorded music to their live performance- at least tonight, anyway.

For a band with such a risqué name, this performance couldn’t have been more G-rated. Even though the songs tend to be high energy, the crowd seemed subdued and still. It reminded me a little of a Peter, Paul & Mary show-- like, pass me the wine from the picnic basket, I'm gonna need to get a bit

more of a buzz on to get through this. Or like they were saying to each other “let’s all harmonize as loud and earnestly as possible”, but with 5 more people on the stage than PP&M, and one of those five I found to be annoying and a bit of a knob, as my sister would say. Neko Case didn’t feel anywhere near as strong as she sounded when I saw her solo this summer.

The highlight of the show for me was Kathryn Calder, who plays keyboard and accordion and harmonizes heavenly. I also loved the band name in lights on the stage and the fact that they have a shark on their new album. And they did play Mass Romantic, the song I was hoping for.

I should probably offer the disclaimer at this point that I'm sick and was having a hard time even standing during the show. Perhaps my illness could have impacted my level of enjoyment. It wouldn’t stop me from going, you know. Hell no. I'm a fuckin rocker. And besides, for all the shows I see, it’s probably good that I don’t love all of them. No one would trust me if I gave 7 thumbs up to every show I saw. So just to remain credible, I’ll give this show only 5 thumbs up. And here’s some video for you to enjoy.


Mass Romantic played by The New Pornographers, October 30, 2007 Atlanta GA
Posted by Sara Ashes at 12:25 AM

I was also at the show, and I was absolutely blown away by how good the New Pornographers were. I am a huge fan of the band- I have all four albums and love them, but I have never seen them live. They greatly exceeded my expectations, I found them to be spectacular. While I will agree that the crowd was lackluster, it was the largest crowd I have ever seen at the Variety Playhouse, and I have been to at least 10 shows there. I have also never seen Neko Case perform live, and she was the highlight of the show for me, her voice is unreal. I was greatly impressed that the band played two encores, and for a total of 2 hours. Most bands I see play for only an hour now-a-days. Do you have the complete setlist? I am trying to reconstruct it from memory, but it has been difficult. They played at least 21 songs. Great video too, I only got a few video clips myself.

Thanks so much for your feedback, AP! I didn't get the setlist, but I did get more pictures and video. I'll put them up on later on.

Awesome show! The crowd wasn't incredibly energetic, but what can you expect in little five points? At least there weren't many jerks. Here's the setlist:
All the Things That Go To Make Heaven and Earth
Use It
Myriad Harbour
Electric Version
All the Old Showstoppers
Jackie, Dressed in Cobras
Challengers
The Laws Have Changed
The Spirit of Giving
My Rights Versus Yours
Mass Romantic
Adventures in Solitude
Testament to Youth in Verse
Unguided
Twin Cinema
Go Places
Sing Me Spanish Techno
The Bleeding Heart Show

encores
Streets of Fire
Jackie
The Slow Descent into Alcoholism

I'm a little fuzzy on the encores since they didn't go by the setlist...pretty sure I'm missing at least one song.


And I hate to nitpick, but it's a whale!

you busted me Charlie. I saw it was a whale when I linked to the picture. I just really wanted it to be a shark and it does kinda look like one and this is my blog... etc.

I've seen many wonderful, lively, jam-packed shows in L5P. NP was not one of them.

Thanks for the setlist. One song they played that was not on it is "Letter From An Occupant."