My friends are super scary, y'all. Consider this your official warning.

We are so scary that Clayton County felt the need to pass a law this week to make sure we couldn't protest there. You see, about a dozen of us held signs there a month ago asking a doctor not to participate in the execution of Troy Davis, a possibly innocent man on Georgia's death row. It was very scary.

We are so scary that the Department of Corrections turns security cartwheels when we arrive at the prison in Jackson to vigil while the State is killing a human being. As visitors, we are allowed just inside the gate (the prison itself is at least a mile back into the grounds) where we are greeted by one after another corrections officers who will check our IDs, ask which side we are on, and tie green plastic ribbons on our wrists to signify we are opposing the execution.

We then are vetted by the Canine Unit; two guards and two dogs search our cars. They are searching for bombs purportedly brought in by those of us who are there because we believe that killing in all its forms is wrong.

You never know, though our folks have been coming peacefully since 1983 to bear witness to the State's killing of 42 men, we just might decide to something do something crazy. Like maybe we'll get those fancy battery-powered candles instead of our usual match-lit ones. Tremble with fear, dudes.

See for yourselves how scary we were today in this photo by Peggy Attaway: 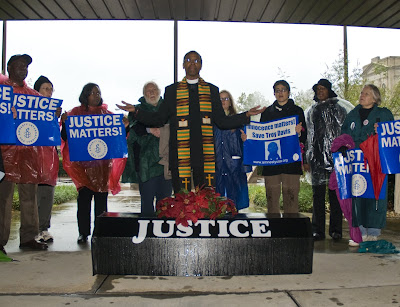 We marched in a funeral procession through the cold rain to deliver this casket and petitions from over 140,000 people collected by Amnesty International to the Georgia Board of Pardons and Paroles. The funeral and casket represents the metaphorical death of justice. Following that, a delegation of clergy led by the Rev., Dr. Raphael Warnock of Ebenezer Baptist Church delivered a letter signed by 100 Georgia clergy and 400 clergy from around the world to the Governor Sonny Perdue's office.

We are so scary that when I was allowed to enter the Twin Towers building to actually deliver the petitions - this is of course after being quizzed by a Capitol police officer with four of his sergeants backing him up about our intentions - I was personally escorted by Parole Board staff. Mind you, this is the same building I eat my lunch in daily between January and April each year. He remained within inches of me the whole time. In my sparkly hat, pink scarf and drenched velvet jacket I must have been particularly scary today.

I passed one Parole Board staffer after another. I think the officers were surprised when various high-up officials at the Parole Board - including the Public Affairs officer and the Director - came out an hugged me. Why shouldn't they? We have worked together amicably for years. Nothing to be afraid of.

But yet my escort remained next to my elbow despite my warm welcome by his bosses. And the Captain of the Capitol police nervously asked me again the same questions about our intentions when I emerged and we approached the Capitol. Looking at the motley crew in plastic ponchos and green umbrellas, I thought to myself, "how strange that we make them so nervous..."

But then the moment came as we stood outside the Capitol, waiting for our Clergy friends to emerge from the Governor's office. I felt my phone vibrate and saw the text from the lawyers: "Troy has a stay from 11th circuit -- it will extend past the warrant period." This means NO execution on Monday!

As we cheered and hugged then sang and prayed it hit me: THIS is why they are afraid of us.

This post is dedicated with love, respect and gratitude to Laura Moye, a very scary person who is celebrating her birthday today.
Posted by Sara Ashes at 4:48 PM

If by "scary," you mean "magnificent," "powerful," and "inspiring," then I'm on the bandwagon. YOu and your friends are scary as all hell!!! I'm SO happy and proud of you all!

I think this, of all of your wonderful posts, is my very favorite. You should try to get this published, sista

Awesome, my fierce sister! I am so inspired by your scariness, and proud to have worked with you!

I second emil, this one should be in the newspapers

Booyah! take that Jerks with guns.