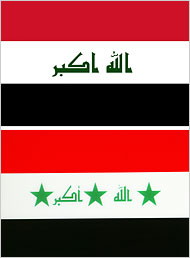 I just found out that the new Iraqi flag was approved by Parliament today. The sad sad thing is that they removed the beautiful three green stars, and left the Allahu Akbar- not in Saddam's script though.

The green stars were originally placed there for the proposed union with Egypt and Syria, which both had flags with two stars in the middle at the time. As a child I had no knowledge or connection to this fact- I just loved that there were three beautiful green stars on MY flag.

This hits one more time the ridiculousness of choosing to fight religious fundamentalism by invading one of the most secular countries in the Arab world- the result, now we have a flag with a religious phrase on it. And the least of the problems. So now we join Saudi Arabia as the only two flags in the world featuring religious phrases.

This makes me revisit the idea of getting three green stars tattooed on the inside of my wrist. It would be a memorial, a goodbye to the Iraq that I remember.
Posted by Sara Ashes at 9:36 PM

my brother-in-law, who is syrian, has the three green stars tattooed on his back. yes, another sad, sad death in iraq. ps- you should absolutely get it tatooed on your wrist.

that would be a beautiful tattoo Sara

This would make a great lesson for students....comparing the two flags and the reasoning (good or bad) behind the changes/additions.

You acted as my muse today. Thanks!