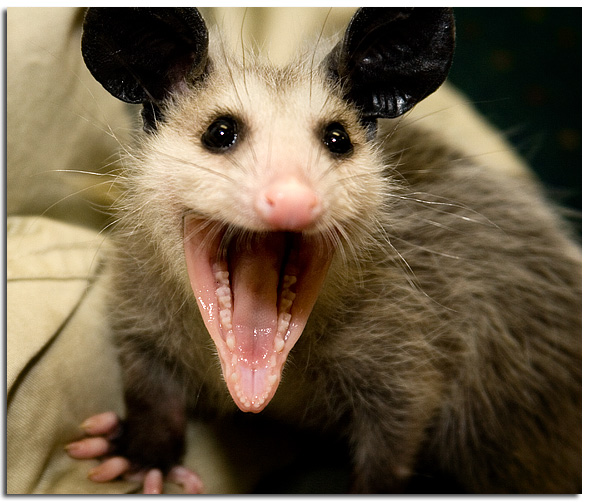 I was settling in for bed to try to get a good night’s sleep in preparation for what I’m sure will be a long day at the Capitol, when I hear my roomie Anne’s voice from the living room.

I saw I immediately: a liveass possum scurrying about in my living room. Holy God.

I’ve always seen possums in my yard; I’ve even given them cute names, like Blossom the Possum and her son, Awesome the Possum. This liveass, cat-sized, ghost-faced possum in my living room, however- not awesome.

After a couple minutes of squealing and carrying on – in which time the possum got itself nestled all snug-like up against the wall under a table – we started strategizing.

We considered the cat, then he waltzed in the house and right past the possum without batting an eyelash. We deemed him fired for failing to protect us from the beast and must now be locked in the craft room as a pre-emptive measure. I then called and text messaged the boy, aka the many-home-owner-landlord-type to see what suggestions he would have. No answer from him- he too is fired. This situation was clearly being left up to us girls.

Now I’ve had birds in the house that I’ve had to chase out, and the cat has brought in tiny garter snakes in that I yanked from his teeth and tossed out the door—but this was a whole different universe.

We started by opening the front door, the side door, and the back door. We decided to hurl a couple paperbacks (The Best Democracy Money Can Buy and Caramelo) underneath the table to try to startle him out. Nothing. It appeared…dead. Oh yeah. Possums play dead. Hmm. Perhaps we should shove it out towards the open front door with something with a long handle.

Armed with a broom and a mop respectively, Anne and I screamed a bit more and proceeded to try to push the possum out. Of course we should have known it wouldn’t be that easy when it instead ran further into the house and hid behind a couch. Pardon my language but fucking HELL. You would be cursing too if you had a liveass possum sliding around on your hardwoods.

So then we decided to create a barrier-wall out of the furniture to try to guide it out the front door. We again persuaded it to move with the broom- out the door it did not go. It ran further back into the house and straight into my bedroom and under my bed. Oh it is ON.

I am SO not having any liveass possum sharing pillow talk tonight. Oh HELL no.

That’s when she came out, emerged from my soul, my chest: Possum Warrior Princess. Armed only with a broom and a tenacity to purge her lair of all things giant and rodent-like, I ran, chasing that little bastard from one corner to another back and forth in my room until it ran out the door. My heart was pounding and I felt the wheezing coming on- Warrior Princesses sometimes have asthma afflictions, unfortunately.

After emerging from my room, the possum nestled itself back behind the couch. Now Anne and I were wise to its tactics so we had a better idea of strategy: I would push it out from the couch and based on our now wealth of possum-behavioral-experience, we knew that it would likely run toward the back of the house where Anne would guide it out the door with the mop.

What really happened is that I pushed the possum from out of the couch, it ran towards Anne who screamed. So I screamed. And then we both screamed and started running after it shaking our weapons in the air. And we chased that little fucker straight out of the back door!

High fives, hugs and giggles were abundant. We sat at the dining room table and caught our breath and thought that perhaps a couple shots of liquor might help to settle the nerves for sleep. We did it- with no help from anyone!

We are Badass Possum Warrior Princesses and succeeded in protecting our home from being ravaged by the string-tailed, small-dog sized, creepy as hell invader.

Here are the Lessons learned from the Great Possum Invasion of 2008:

Hurl heavier books than politically right on / magically real paperbacks, something that might actually make an impression on something pretending to be dead – try an unabridged dictionary;

And finally, I am simply too damn old for liveass possum chasing.
Posted by Sara Ashes at 12:05 AM

omg. OMG! this reminds me exactly of the cosby show episode when there's a snake in the house and cliff makes claire help him, and he chases it out from under the bed yelling "ieieieieieieiee!!" and she catched it in the pillowcase and exclaims "I CAUGHT IT! I CAUGHT THE SNAKE!" remember?

yeah. anyhow, amazing work you two. i wouldn't have know what to do. its why i live on the 2nd floor.

I thought of you the most at the part when I was shaking my weapon at it. YOu know, like the old lady with kleenex up her sleeve yelling at the squirrels.

Where the hell were you when i had that rat in my kitchen! Do you know how many boys i called for help to no avail? Now i know who to call.
I am thouroughly impressed. The rat (decidedly smaller than your mighty opossum) reduced both Rachel and i to screaming and standing on chairs. I ended up calling the landlord for help. Keep that on the down low though or else they might relieve us of our "card-carrying dyke" status.

Jesus Christ on a Cracker.

I had a possum in my outdoor trash can last summer in VA and I absolutely made a federal case about it. In fact, I called animal control and because it was a small town, even though the nice animal control guy told me how to get rid of it, he apparently heard the stone cold fear in my voice and decided to drive by my house to see how it was going (answer: not well) and then chased the foul beast away himself, as it hissed and spit and slithered into the bushes. My inner warrior poet did not come out that day.

I am in complete and utter awe of and swelling with pride over your super Possum Smiting Powers. And I have mothereffin chills up my spine from your story! AAAA!

By the way I love Caramelo!

Hil-larious. But how did the possum get inside in the first place? And did it eat anything while visiting?

It got in through a hole in a closet that goes to the crawlspace. Eek the Cat uses it as a cat door. Not any more... We not only securly shut the door but also pushed a ginatass dresser in front of it to make sure Blossom couldn't get back in. Yuck.

Holy shiznit! Remember my "pet" possum (early 2001)? His name was MyPossi. He came into my life briefly to warm my heart after a crappy breakup. You were in Ireland and so only heard the tales of the goodtime. Its awesome to keep up with you through blogspot. Hope all is well!

CRAE!!! I totally thought about you and MyPossi with this revent possum incident. I thought "they must be way cuter when they're babies than this sickass thing waltzing across my living room!" :)

Great to hear from you, great of you to stop by my blog.

I am outraged by your prejudice toward Marsupial Americans. They were her first. All they want is to eat your garbage and a warm place to s***. For all of your supposed liberalism as soon as you are personally inconvenienced you react with fear and loathing. Your pathetic efforts to demonize an entire group to justify your actions are disgusting. You are a BIG FAT HYPOCRITE.

Who knew your convictions on behalf of marsupial americans ran so deep? Do you feel similarly passionate about soup made from their succulent meat?

I came upon this blog because I too found a possum curled up behind a little gate we built on our front porch by the door. I'm having the hardest time getting it into a cage to decide what to do with it... WHAT DO YOU DO W/A POSSUM ONCE YOU CATCH IT?!

Nice story. About 2 minutes ago I just dealt with a small possum entering my domain, then entrenching itself under my bed. After numerous failed attempts to get my cat to flush it out, I pulled back my bed about a foot. Then I threw my previously reluctant cat into the gap, then the possum ran out. I WIN!

If you enjoyed my legendary possum chase, you will defintiely be amused by my sister's encounter with the bat in her living room. Enjoy!

Liveass Possum Chasin rocks! Thanks for the laugh. And if this 4 foot ferrol fkr gets in the house, I am calling you! I had to call animal control over a squirrel at Alexa's once -- but I swear it sounded like a warthog and looked like a wildebeest.